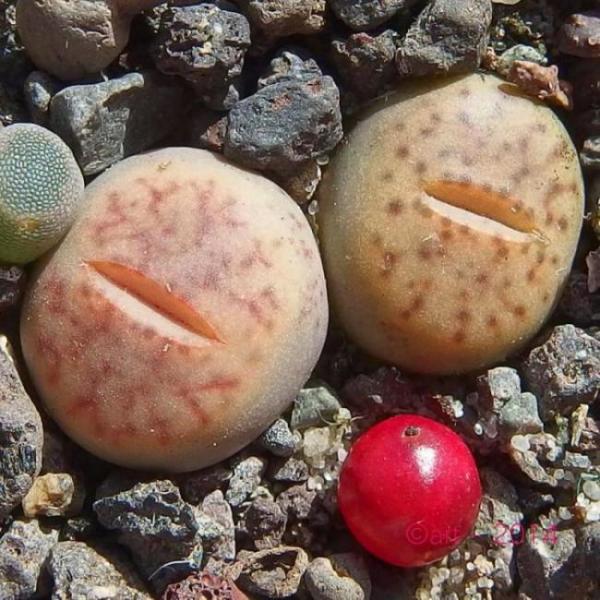 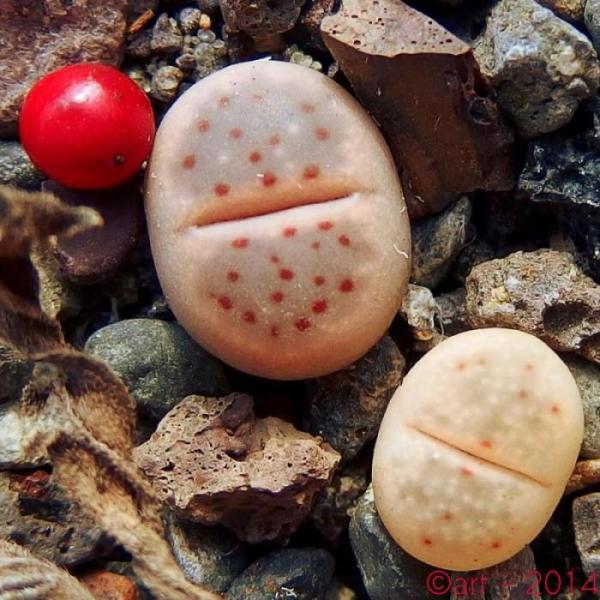 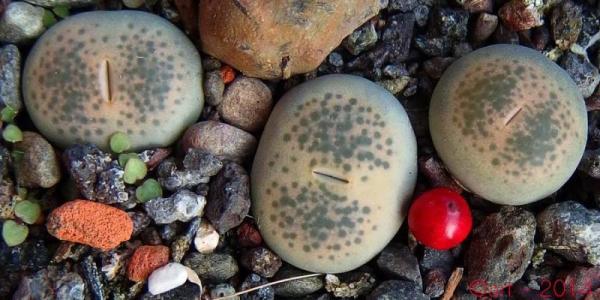 The last one to germinate, Lithops terricolor ‘peersi’ C131 are now  the biggest of all seedlings.

Lithops hookeri subfenestrata ‘brunneoviolacea‘ C019 has been by far the most prolific and vigorous of all species sown.

First to hatch, these Lithops lesliei venteri ‘maraisii’ C153 are not the biggest after their first year.

Germinated very plentyfull, most Lithops hallii C119 died during a hot spell in midsummer in an intruiging sudden death episode. Only a few remained.

Lithops julii brunnea C179 has largely grown in the shadow of a tolerated weed, Conyza bonariensis, and does seem to like it.

Also this one suffered much in summer, Lithops verruculosa C129, two of the few remaining seedlings.

Happy birthday to you all! 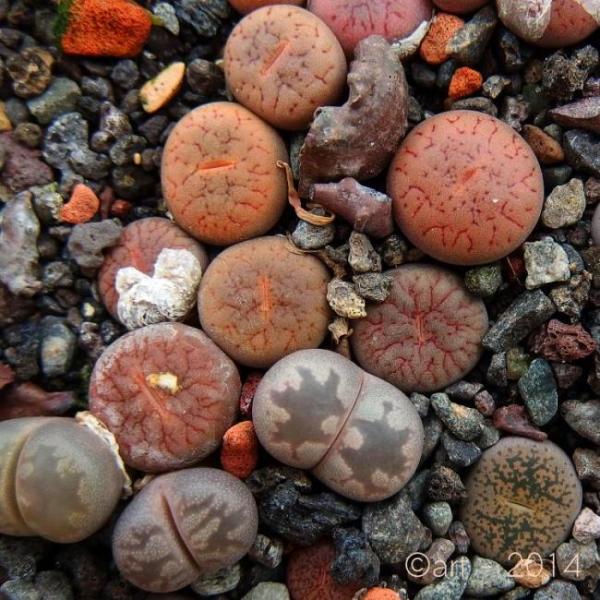 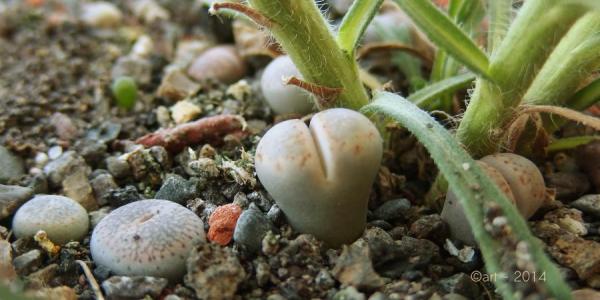 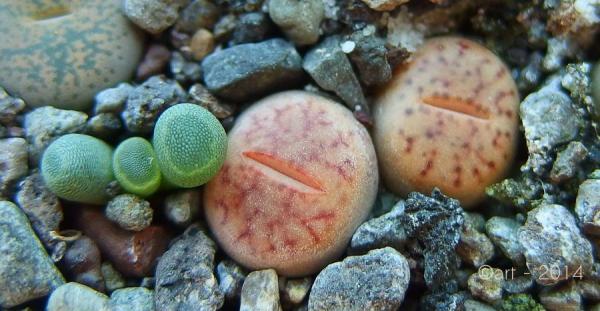 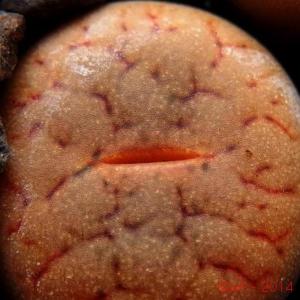 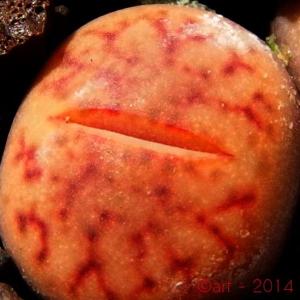 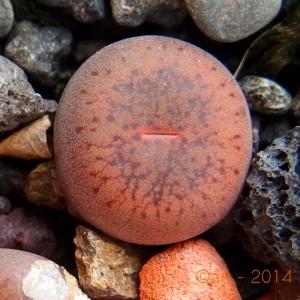 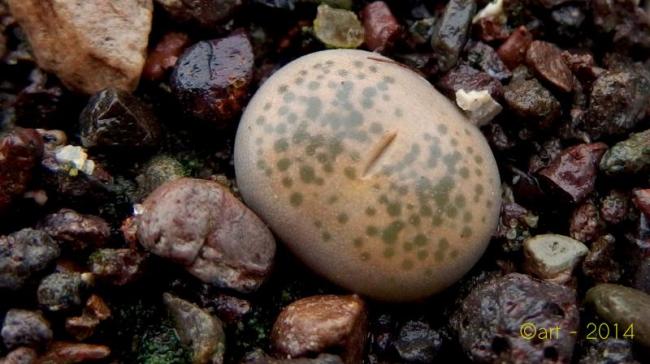 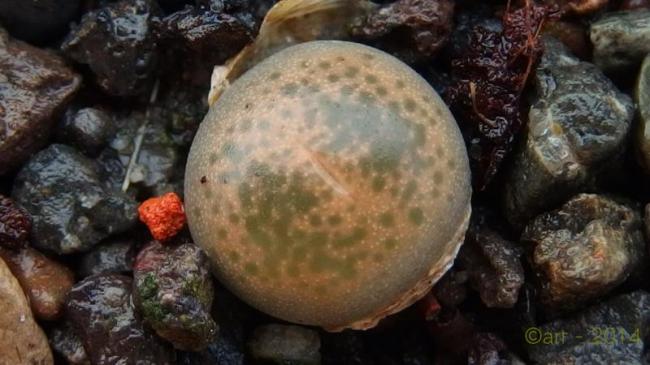 Lithops terricolor ‘peersii’, C131.  The last one to sprout and now one of the biggest of all.  Nice translucent markings.

Lithops generally are easy to germinate. Most seeds, if not to fresh, will sprout in a few days, and there will be germinations many weeks later, too.

The embryo quickly forms a body, consisting of the two cotyledons or seed leaves and a tiny tap root.

At this stage, all you see is very green and extremely frail. Two green tips and a fissure in the middle – one millimeter all in all.

The fine gravel looks like big boulders but soon the young plant will be able to push its way up to more light and sun. The tiny plant  changes quickly into the caracteristic shape of its species – a flat cotyledon like e.g. in L. lesliei or L. aucampiae, or barrel-shaped as for instance in L. bromfieldii. One other characteristic is the length of the tiny fissure, where the two fused cotyledons leave a gap for the next pair of leaves to emerge – the first true pair of leaves of the young Lithops plant.

Lithops terricolor ‘peersii’ C131 has an apple-shaped cotyledon with short fissure. The hatchling changes  into a loaf-of-bread-like  shape with a short fissure. 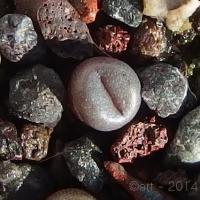 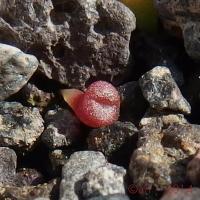 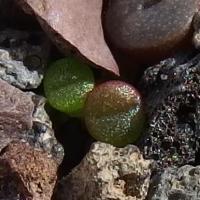 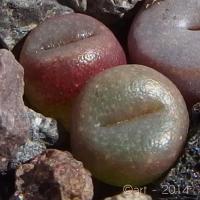 Lithops otzeniana C280 does not germinate as readily. The young cotyledon-bodies are green with a red hue and apple-shaped. The fissure runs through 3/4 of the surface. While the first pair of leaves appear, the cotyedons persist and split deeply. The fissure of the newly formed body runs from side to side. 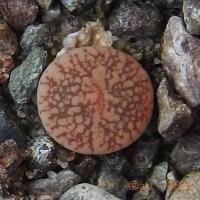 The cotyledons of Lithops lesliei ‘Maraisii’ C 153 form a flat elliptic body, shiny, grey with a lilac hue, and a small central fissure. The first true pair of leaves resemble the adult Lithops and have a short, reddish fissure. 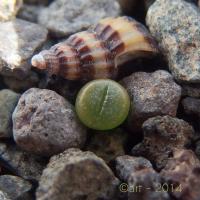 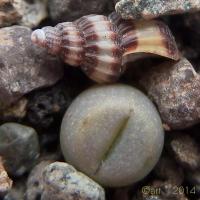 Lithops julii brunnea C179 has green or dull coloured, barrel-shaped bodies,  with a long fissure that nearly runs from side to side. The emerging Lithops looks like the adult and has a complete fissure. 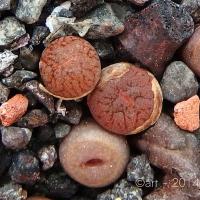 Lithops hookeri var. subfenestrata ‘brunneoviolacea’ C019 makes fairly big, flat-topped, barrel-shaped cotyledons, reddish and dark, with short fissures. Just before hatching the cotyledons fade to a dull beige. The emerging colourful body is flat,  with a short fissure that sometimes runs over half or more of the surface. 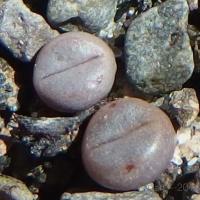 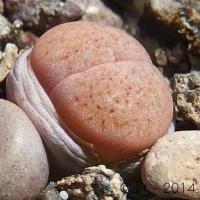 Medium dark grey cotyledons are characteristic of Lithops hallii C119, shiny and flat, with a strong and long fissure over rhe whole face of the body. The first true leaves display a new colour, and a complete fissure. 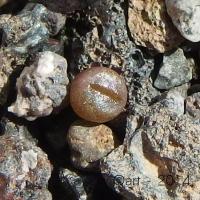 A very distinct first pair of leaves emerge from small and inconspicuous cotyledons.  The cotyledons of Lithops julii var. fulleri C162A are round and dull coloured, the fissure is long. The new body formed by the two true leaves rises high above the slowly drying cotyledon, with a complete fissure and the fully visible grey conus of the typical Lithops. These plants have recieved the same amount of light and sun as all those previously shown!

Lithops aucampiae C333 do their own thing. While some hatch and grow, others still await looking at the outside world. Flat, shiny cotyledons, barrel-shaped with a distinct concave face with a rim, grey or reddish, always dark, short fissure. The new pair of leaves form a nearly round, textured body, with a short fissure.

Lithops lesliei lesliei ‘luteoviridis’  has flat, elliptic, rimmed cotyledons. The fissure is half the length of the smaller diameter. The first leaves look like a small Lithops luteoviridis; with a short fissure, as in all lesliei- seedlings I’ve seen. 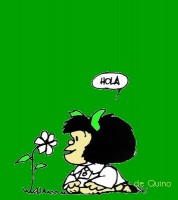